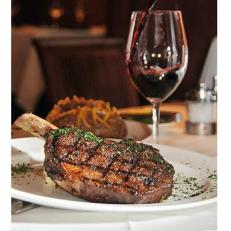 The other night, a less than middle aged man entered the hallway that shared destinations of both the kitchen and the guest bathrooms.  Here, he stopped with his toddler in his arms, and looked directly into the face of his young boy.  “This is not the way we are going to behave,” he said, “You are going to sit in the chair and have a nice meal without yelling and running around.”

The child responded with an attempt to exert his will again.

The man moved his face closer, and repeated himself.  He then added, “I expect you to control yourself.” Once the face of the toddler had fallen from its attempt at manipulation, the man returned to the dining room of John Elway’s Steak House, in the Cherry Creek neighborhood of Denver Colorado (a white table cloth restaurant), where the rest of his party was located.

After watching this interaction, because I was standing in that same hallway, I was compelled to say out loud in the man’s general direction, “Good Job Dad!”

I realized in that moment that there is little encouragement these days for Dad’s being dads. Even people who agree that dads are important, don’t go out of their way to build up a man who takes up the responsibility of what it means to be a good dad.  It can be a difficult job, especially when your pride is on the line.  This Dad’s priority was guiding his young boy, even though it was a little out of his comfort zone, took him away from his guests at the table, and would probably not be the last time he would have to say this to the child.  But he did it.  He did his job.  Good Job Dad!

My name is Ricky Cassford, I am the father of four children myself, and I have a passion for seeing men take up the mantle of Dad!

Our society seems to have some mysterious initiative that would have us forget what the position of a father is truly meant to be. But rather than worry about addressing the origins of that phenomenon, I want to actively pursue doing something about it.

I can’t do it alone.

I want to encourage men to stand up for their families and discover anew what it means to be a dad!  God chose to use the analogy of a father and a son to describe his own character and His relationship within the Trinity.  Over and over  He uses this analogy to help us understand who He is, and how we are to relate to one another.

Solomon once said, “Grandchildren are the crown of the aged, and the glory of children is their fathers.”  Yet many men out there who have fathered children don’t feel like, much less act like, “the glory of their children,” and yet that is exactly how we are designed.

Will you stand with me?!  I want to see the terms Dad and Father become synonymous again.  That’s the reason I’m writing this.

So, please join me by following this editorial on what it means to be a father, and comment on what you like, don’t like, and can relate to.  We are in this together.  I recognized I don’t have all the answers.  I need this as much as anyone for my own journey to become the father that I am called to be.